It's the 20th Anniversary of Google. Here's What We Can Expect for the Next 20.

Google's "search liaison" Danny Sullivan released a series of tweets on September 24, 2018 to showcase the future of the search engine. In light of growing platform fatigue from publishers across the digital space, Google has experienced a resurgence in 2018. 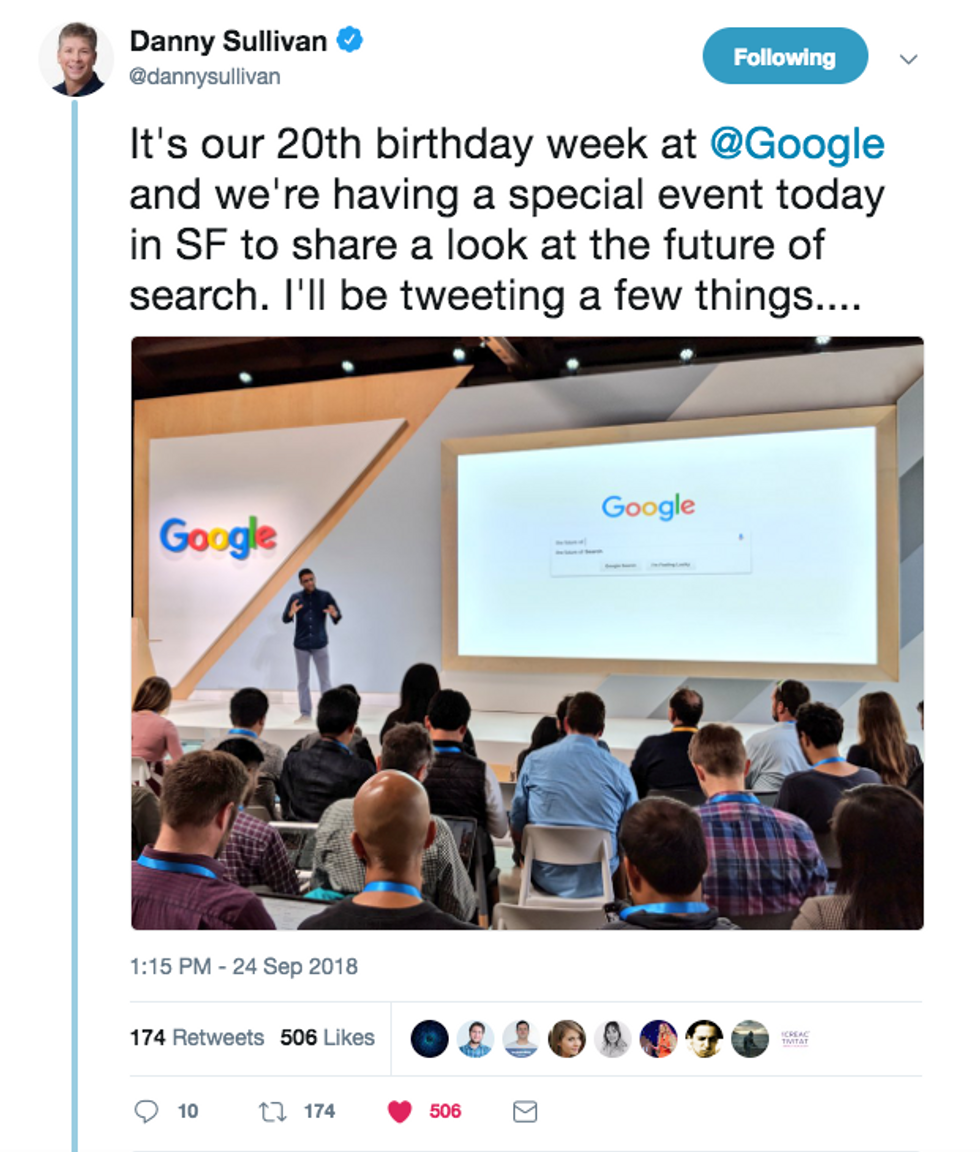 The tweetstorm was designed to both celebrate Google's 20th anniversary and announce their plans for the next two decades. In the official announcement, Google reaffirmed a commitment to user experience. Many of this year's Google algorithm updates have shifted toward streamlining users' experience during search, with a deliberate focus on delivering relevant, quality results to queries. This same sentiment was confirmed during Sullivan's flurry of tweets, along with the announcement of some other useful updates to the search engine. Here's a look at what we learned. 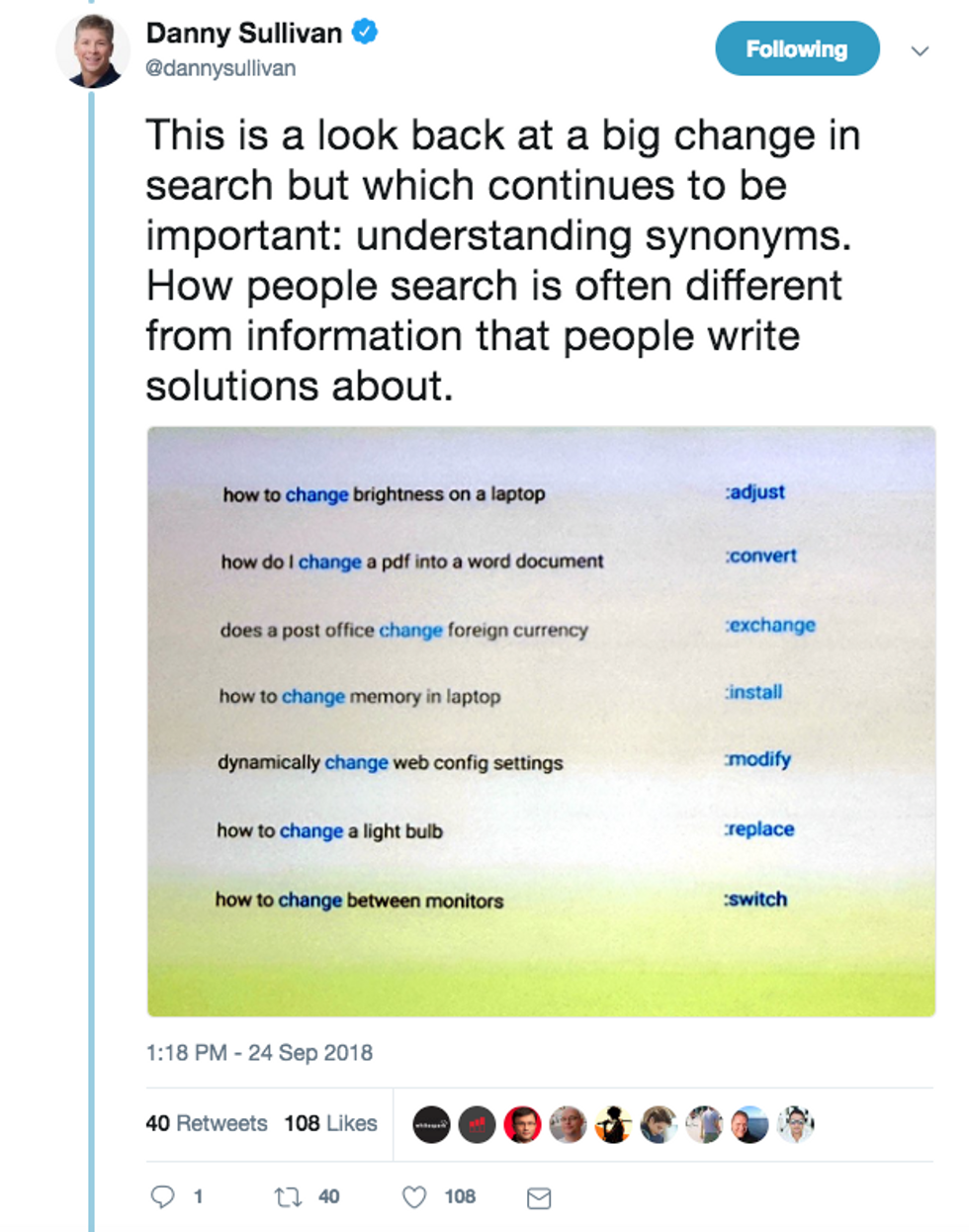 When websites and publishers first started strategizing around search results in the early days of search engines, there were a number of ways to slip your article onto page one of the SERP. Some publishers practiced methods such as keyword stuffing and writing for SEO specifically, which often resulted in robotic and stilted copy. But over the past 20 years, Google has figured out how to better understand a user's search for solutions, and has catered results based on finding the right answer — not just the most optimized-for-search article page. As you can see in the first tweet of Danny's storm, users can use the word "change" in a search query for many different scenarios. The algorithm has now advanced enough to recognize the difference. 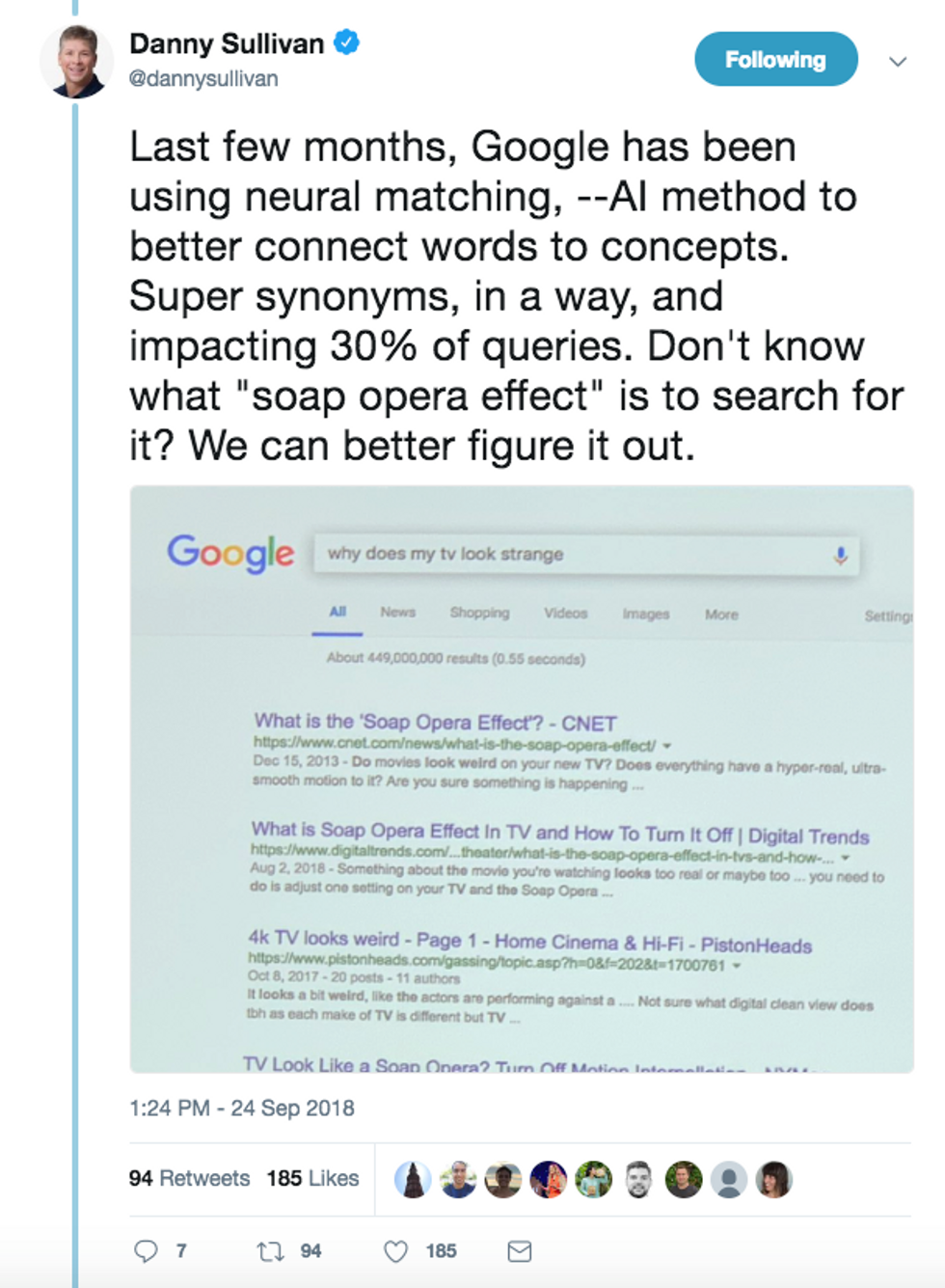 Sullivan said that the search engine is leveraging artificial intelligence to help better understand synonyms. Google has launched several AI-powered updates and campaigns this year to optimize users' paths to correct answers. Using what's called "neural matching," the algorithm is able to match words to concepts that may have been mismatched or lost before.

Search Is a Journey 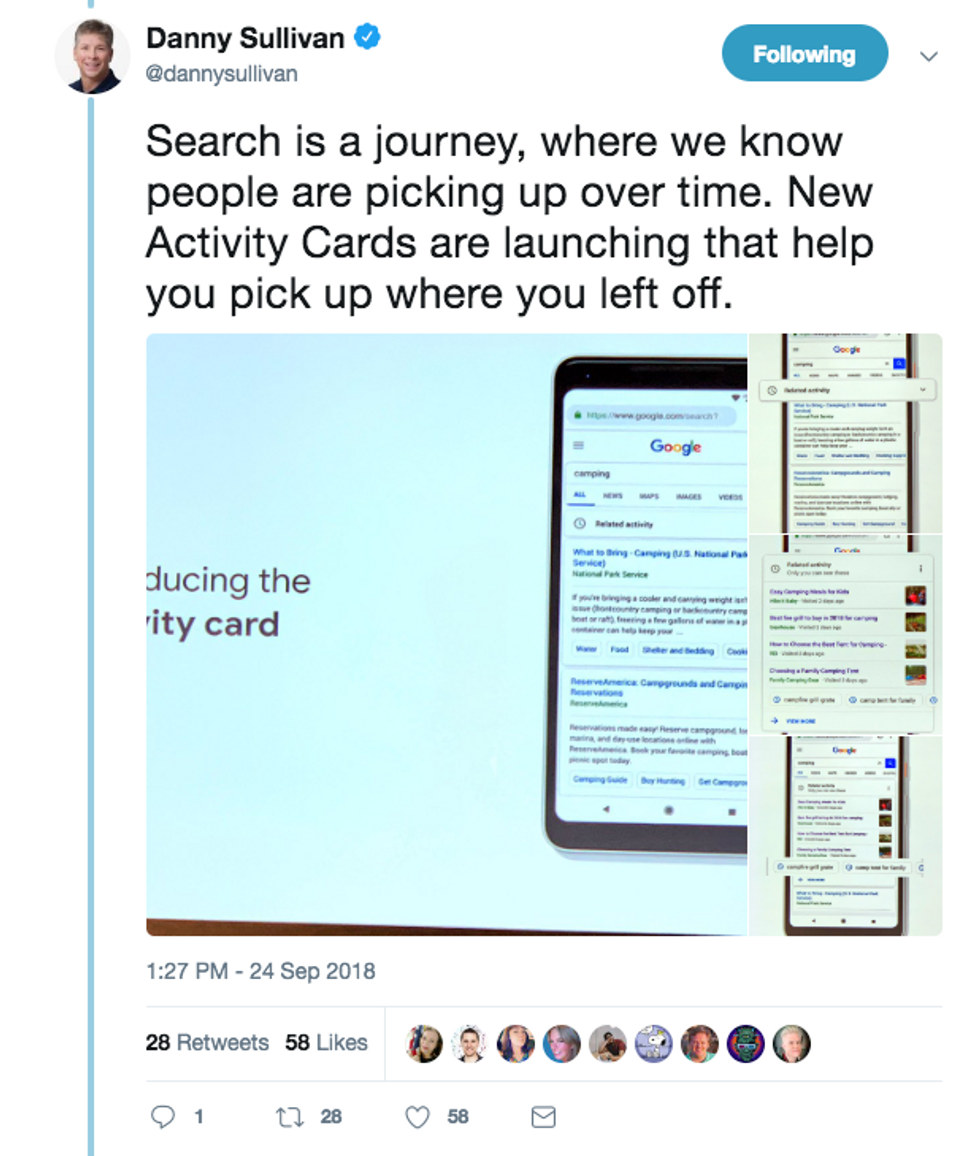 The idea that search is a journey and it doesn't have one solid end has been a concept Google has explored all year. Sullivan announced several updates in his tweetstorm that aim to explore this journey further, announcing a save-for-later feature for users who may lose track of their original search queries. 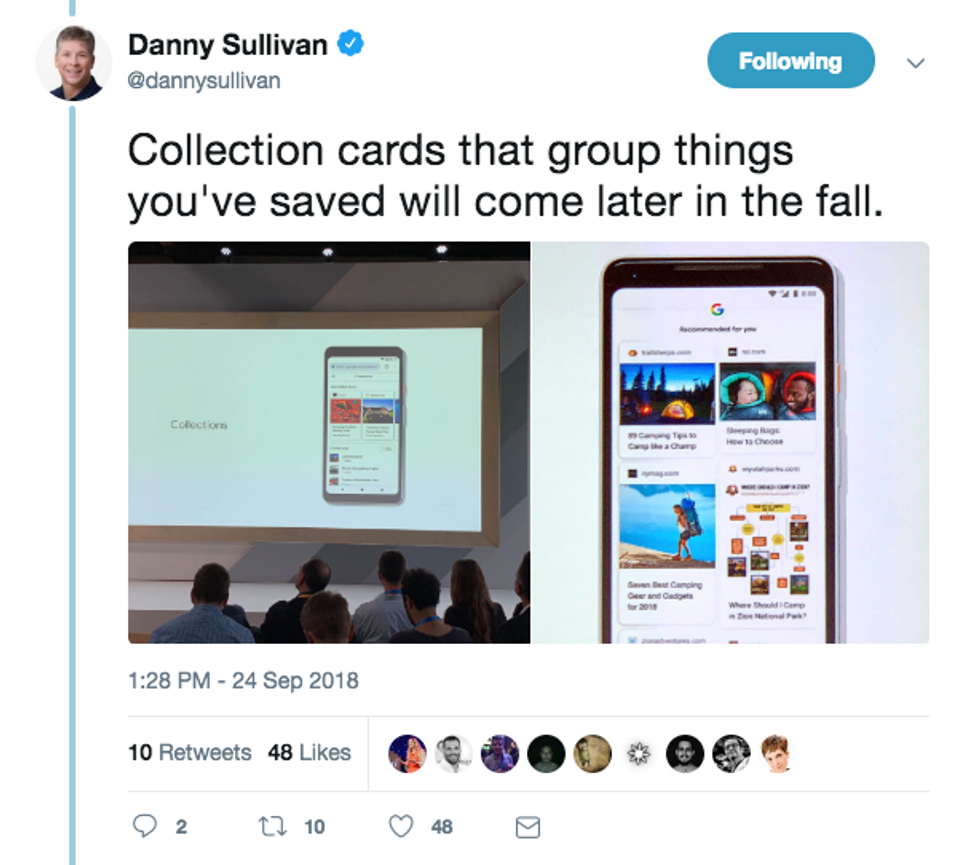 Sullivan announced that content users save for later will eventually be grouped into Collections that searchers can continue to reference. This is particularly interesting as Google continues its tug-of-war with other platforms. There are similar features to this on Instagram and Pinterest. 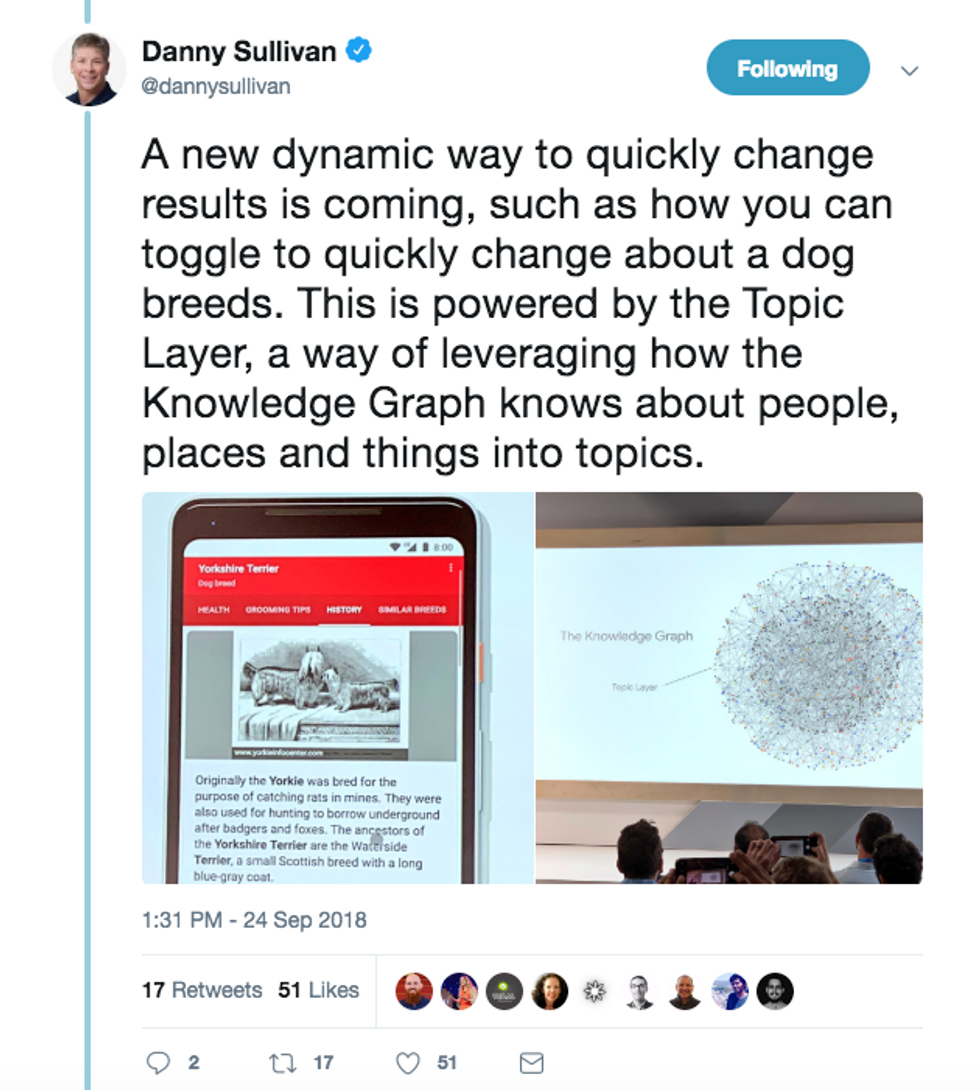 Another part of understanding a searcher's journey is enabling them to easily explore a topic. The Topic Layer will leverage what the algorithm already knows about a user's search history in addition to how a subject naturally relates to other search topics. 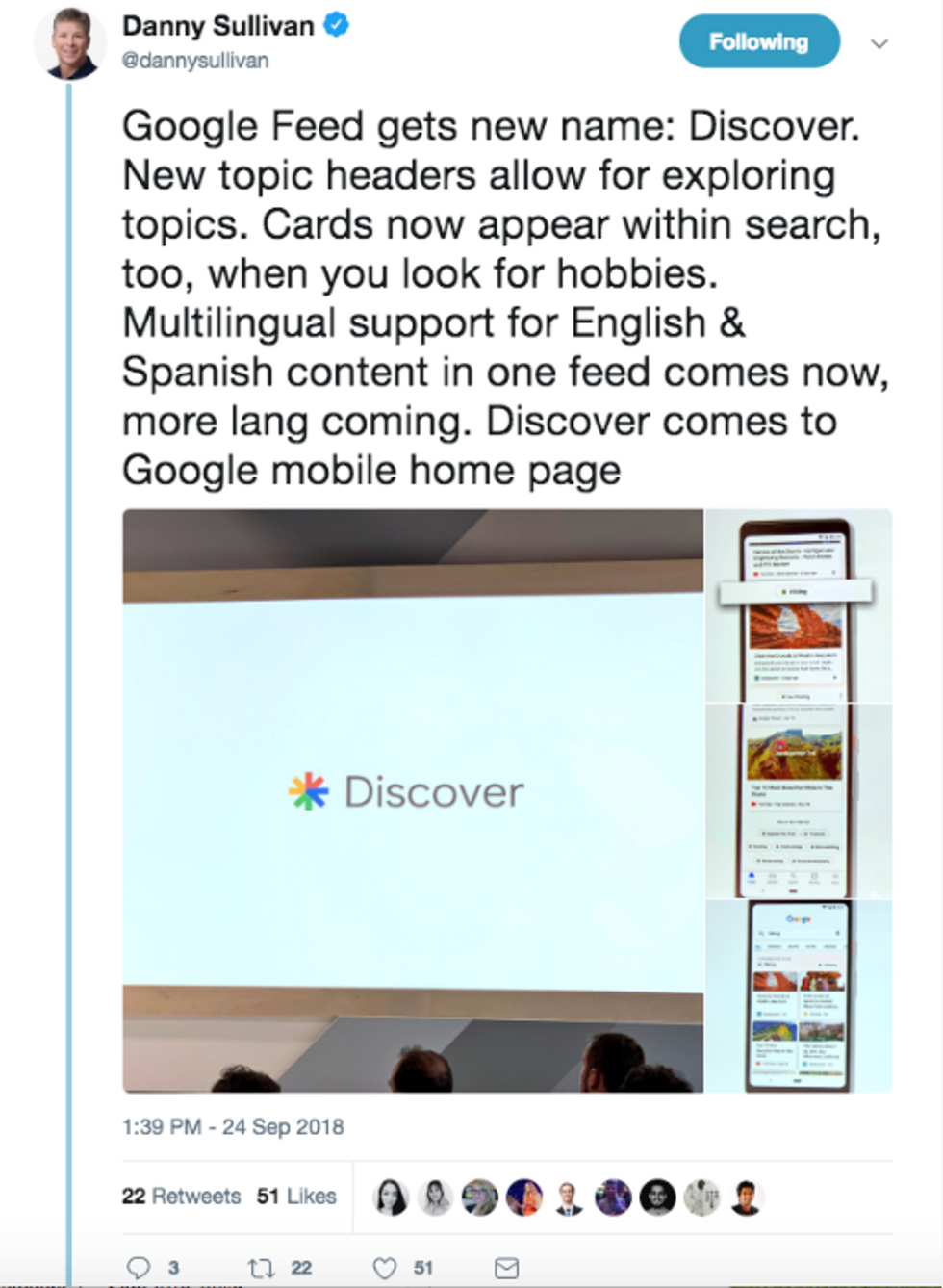 The Google Feed has been rebranded as Google Discover. Users will be able to explore a specific topic via Google Search using cards and additional native information available throughout its pages, rather than just the top results. This is an effort to not only continue to enhance a user's journey, but another way to compete with platforms such as Instagram and Snapchat that have pages similar to Discover. 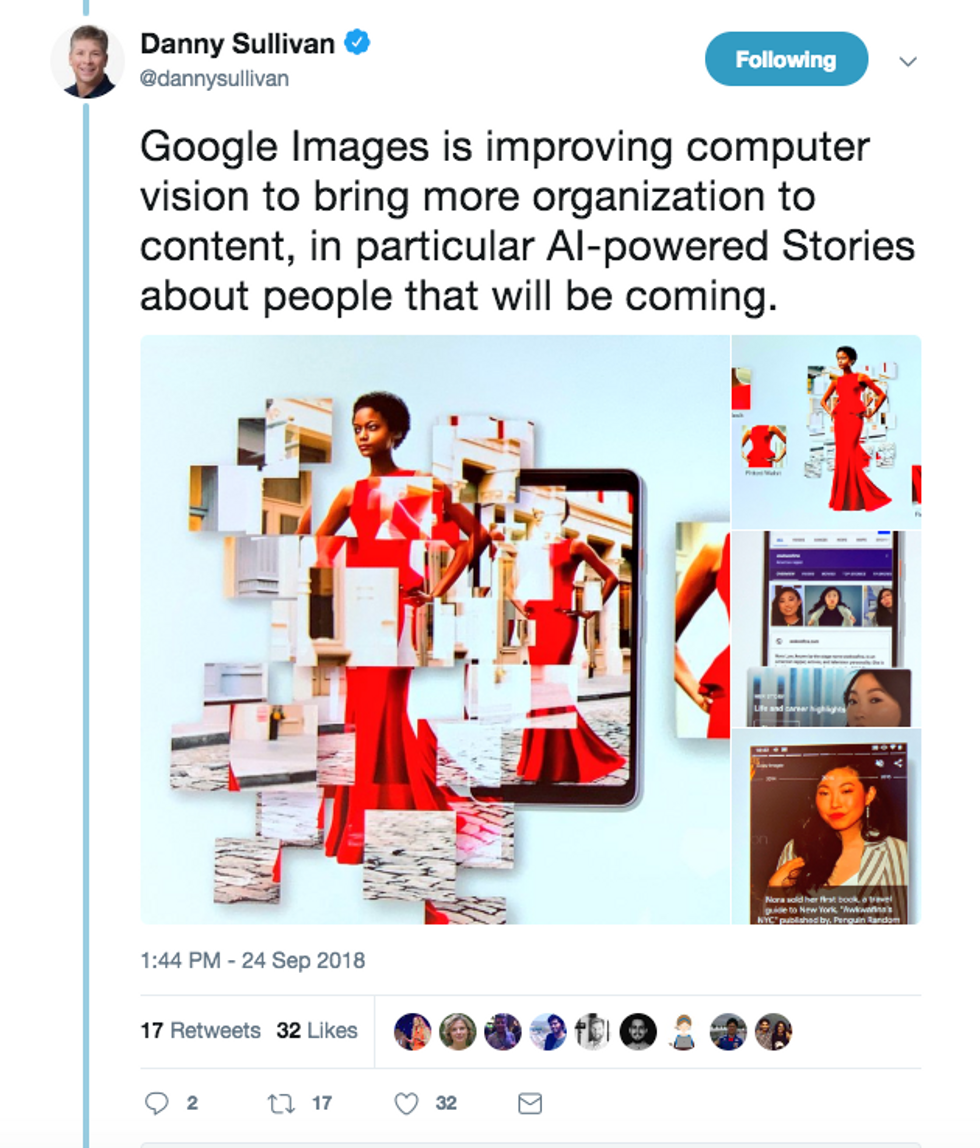 Using the power of artificial intelligence again, Google announced many changes to the Google Image experience, including better captions and breakdowns of related information. Sullivan said they will make the entire search journey more visually immersive with moving images and high-quality photos on the first page of search results.

Check out the AI-powered stories in the tweet embedded below. The search engine is on its own journey to become a social platform of its own.

Google Images continues to have people coming to browse images as a way to find info and take actions. Over past year, ranking has changed to get more actionable content, captions to describe it better.... pic.twitter.com/spC2PIwMkL
— Danny Sullivan (@dannysullivan) September 24, 2018 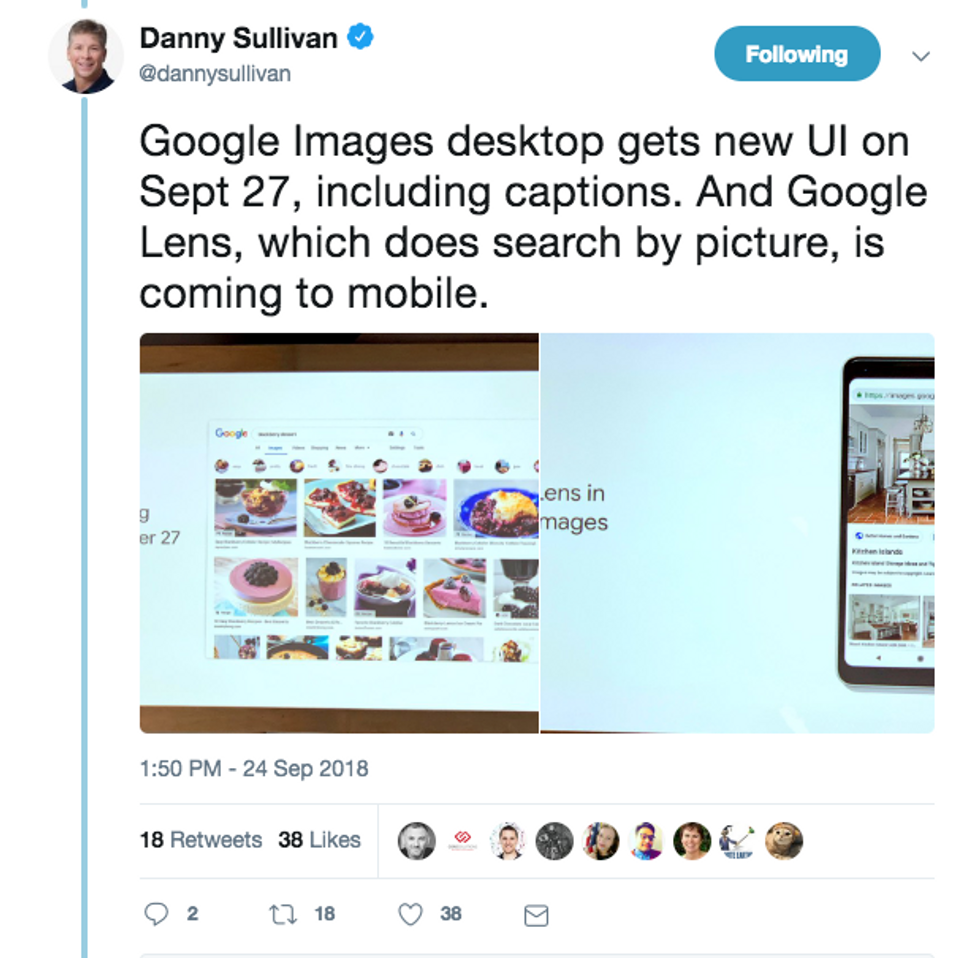 Visual search has arrived with the announcement of Google Lens. Users will now be able to search by image instead of keyword(s) on mobile. Google has updated its algorithm so that Google Image results are not just organized by best photo, but rather by best photo and accompanying content. This will be particularly useful for products, e-commerce, and any other sort of tangible, project-based searches.

Keeping up with the New Age of Search

Google also released a new beta test for SOS Alerts and changes to its job search forums in its large round of 20th anniversary updates. Google's changes usher in the continued return of SEO, which is good news for publishers. The search engine's advancements provide more opportunities for all publishers — both brands and media companies — to diversify their content and revenue streams. After Facebook's "friends and family" update in January 2018, publishers have been experimenting with varying strategies to prioritize content across multiple platforms, including on site.

Search is a wonderful way to not only publish your content in several places — such as Google News and Accelerated Mobile Pages (AMP) — but it's also a tool that incentivizes more clicks to your site. Publishers can now strategize around appropriate and relevant quality content that answers search queries to see their rankings improve, rather than trying to manipulate articles to trick a finicky algorithm.

We can help you keep up with all of the algorithm updates to ensure your SEO strategy is set up to win. Request a proposal today and let's start working together.