Alongside the wealth of updates Publisher Center brings, there is one particularly noteworthy update: Publishers no longer have to submit their site for approval to Google News. They will now be automatically considered.

"Publishers no longer need to submit their site to be eligible for the Google News app and website. Publishers are automatically considered for Top stories or the News tab of Search." — Google

According to Google, publishers will only need to produce "high-quality content and comply with Google News content policies" to be eligible for a top spot in the News tab. This change is significant because it opens up a door for publishers to reach new audiences based on quality articles alone, rather than undergoing an at-times laborious approval process to gain access to the platform.

As we enter the next decade of publishing, and the ecosystem of content continues to be saturated, these changes are more significant. As a modern publisher, optimizing for quality content and site performance is no longer a luxury, but a requirement. If an article has relevant, noteworthy content and meets Google's page speed guidelines, it has an increased chance to make it to the News tab organically. It's an opportunity that doesn't just mean exposure to a larger audience, but also the next potential big break in your site's success story.

In its announcement about Publisher Center, Google notes that the new feature is not a content management system (CMS). However, RebelMouse is a top-tier solution that makes integration into Google News easy. Our enterprise-grade CMS supports modern distributive publishing to reach audiences at scale while still generating sustainable revenue.

If you would like to make the most of Google News in 2020, or just want to learn about how we optimize the modern website, request a proposal today and let's start working together.

At RebelMouse, we like to refer to our enterprise publishing platform as "lean tech." Most publishers have a natural inclination to start doubling down on teams of developers who try to build unique experiences to help stand out above the noise. But they should actually be doing the opposite: Lean tech is the preferred way to cut through content saturation. By allowing RebelMouse to obsess over your product, content producers, editors, managers, and everyone in between can focus on creating quality content and taking advantage of opportunities to leverage distributive publishing strategies that create real revenue growth.

One of the major reasons we're able to maintain a lean tech environment is thanks to our approach to quality assurance (QA). We make updates to our platform daily to ensure our clients always have access to the most robust, high-performing, and secure version of our platform. Behind the scenes, this means having a solid QA structure that's efficient, creates less bugs, and catches the ones that do pop up before they go live. It's a system of checks and balances that's hard and costly to replicate on a custom CMS. Here's a glimpse into how it works.

Our Checks and Balances Workflow 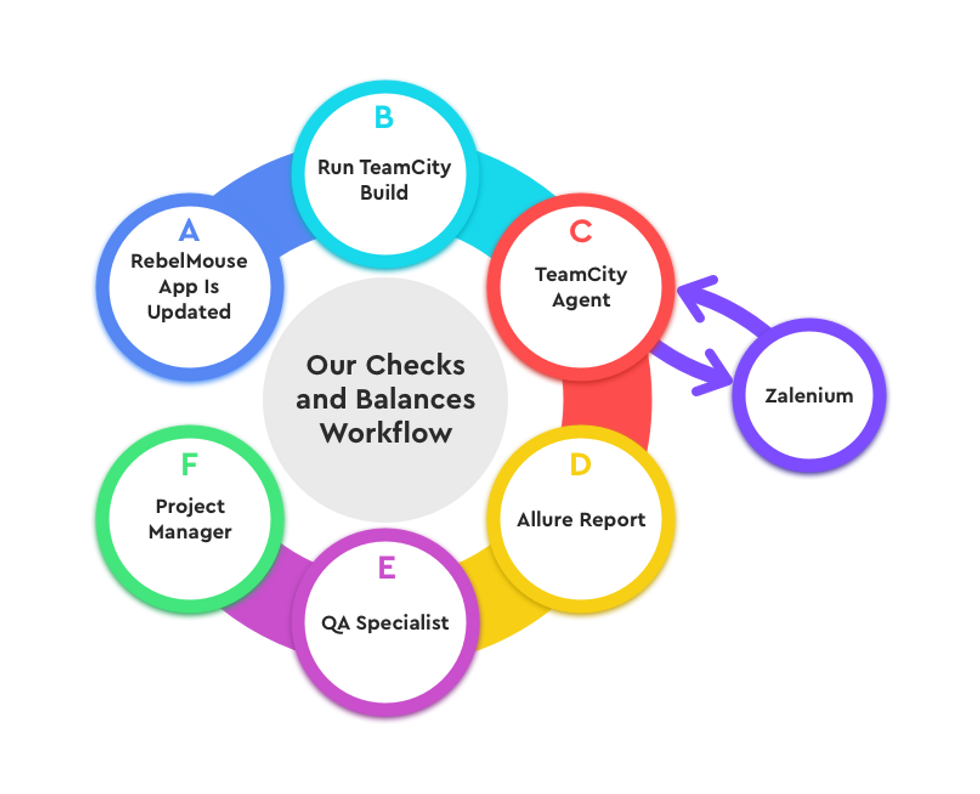 The Lifecycle of a Product Update

When an update is first made to RebelMouse, TeamCity immediately triggers the start of automated tests to review integrity.

The tests run in parallel on TeamCity's Build Agent. Next, Zalenium creates docker containers with browsers that matches the count of parallel threads. An Allure report is then generated from the test results, which shows the state of the application after the update. 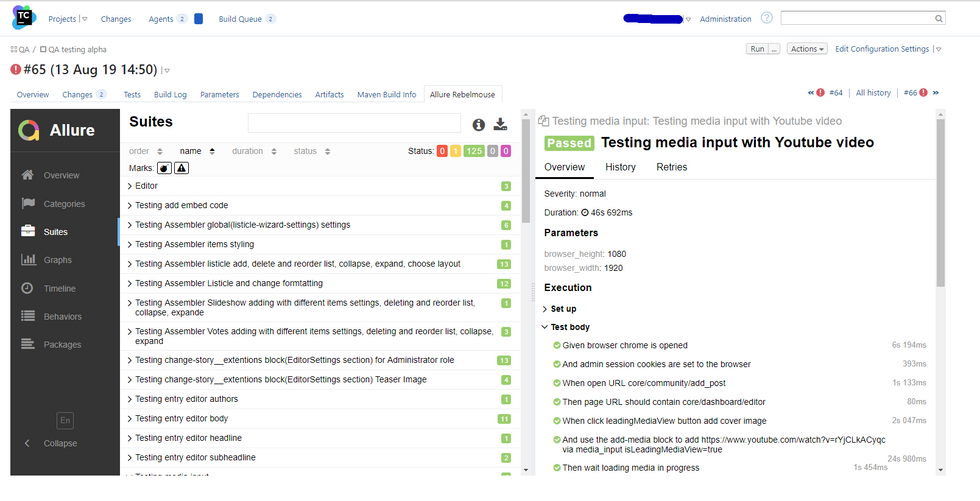 If a test doesn't complete successfully, the testing framework receives a video with a failed test and attaches it to the Allure report.

Based on the report analysis, a QA specialist will create a "bug" ticket in our product management software to address the issue if needed. Then, information about the bug is immediately sent to the project manager and we begin the process of correcting the problem.

The media powerhouses we power can publish with confidence knowing that any product issues that arise are met with a tried-and-true process to fix the problem with little-to-no disturbance to their workflow. If you have any questions about this process, please email support@rebelmouse.com.