Algorithm Shift Aftermath: How We Got Here

It's been nine months since Facebook's bombshell and so-called "friends and family" algorithm update rocked the digital publishing ecosystem at the beginning of 2018. In January, the massive social platform announced that it would begin to prioritize posts from users' actual Facebook friends in its News Feed over updates from publishers. It was a major move for Facebook to get back to its roots after undergoing intense scrutiny following both the Cambridge Analytica scandal and the fake news fallout that surfaced in the aftermath of the 2016 U.S. presidential election.

The announcement had publishers scrambling for new ways to diversify their main distribution strategy in hopes of retaining some sort of social ROI. After all, how are users supposed to find their content if not through the biggest social platform available? Advertisers were quick to declare that organic reach was officially "dead" thanks to the sweeping change. By February, Facebook-dependent new media company LittleThings shut down its operation, citing the dip in reach from the algorithm shift. Though they were able to quickly relaunch after joining RockYou Media.

Seven months after the algorithm change, data from social management platform Buffer found that Facebook Pages had in fact experienced a 50% drop in engagement over the past 18 months. 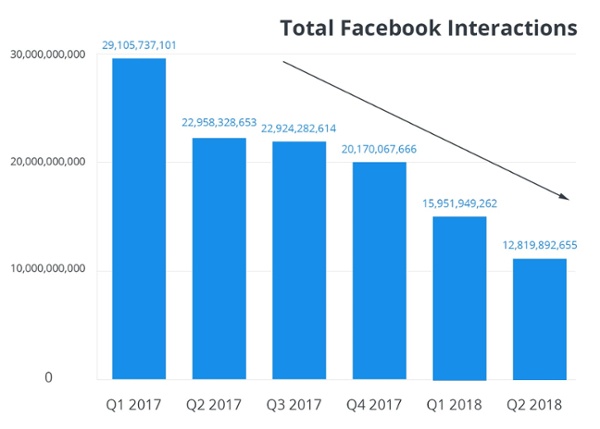 Given the data, publishers have been correct in keeping content diversification top of mind since Facebook's change took effect. Relying solely on a third-party platform for survival is a strategy bound to fail. The silver lining here is that the scramble to distribute content across multiple vehicles has brought about new opportunities for publishers to survive. For example, Instagram has blossomed into a major platform with enough revenue and engagement to go around, and Google has regained its edge on referral traffic over Facebook, bringing in a new age of search.

But what publishers shouldn't do is double down on developers to build a site experience that stands out among their content competition — this can be done without expensive UX/UI teams. It's time for publishers to double down on the opposite to reach their goals. 2018 has proven that it's vital to consolidate tech architecture so more resources can be devoted to content creation and distribution instead.

At RebelMouse, we were born in the age of social. And this means we've been preparing for a shift like Facebook's for years. In turn, we're always braced for the digital space's unpredictable pendulum swings. We're a next-generation enterprise CMS, and a creative agency offering content strategy services from leading traffic experts across the industry. On our platform, your content creators can create dev-like designs that'll set your site apart in just a few clicks. Our proprietary tools help you easily find social influencers to amplify your content with every publish. By making the switch to a full-stack platform that blends product and strategy together, your content is prepared — and even immune to — dramatic algorithm changes and industry shifts.

Our lean tech solution is the reason our clients are doing more than just surviving on Facebook — they're thriving. By publishing to a nimble, scalable platform that was designed around social distribution, our Rebels find new audiences on Facebook all the time. Part of the reason for this is because they take full advantage of our platform's tools, which makes creating social growth more intuitive. But just as important, they now have the time and resources to refine their content for audience building. But don't only take our word for it. Look at the numbers for yourself.

Growth and monetization success on Facebook is still possible. If you want to experience stats similar to our clients, request a proposal and let's start working together. In the meantime, you can count on us to not only track every algorithm change on Facebook and Google as they get pushed live, but adapt our platform to flourish alongside every change.

New Report: Email Is a ‘Key Tool’ for Building Loyalty

What You Need to Know About Alt Text for Search

INP and Core Web Vitals: What You Need to Know

In 2022, Publishers Take Back Control With Subscription Success

It's been a long and winding path, but in 2022 the subscription model continues its upward trajectory as a top revenue strategy for publishers of all sizes. The tug of war between platforms and publishers reached its peak in the last few years of the previous decade, leaving users desperate for a modern user experience that's clear of any clutter from the duopoly that is Google and Facebook. This is why intelligent paywall models are a top choice for users looking to consume content right from the source. When done correctly, the strategy can work for any type of media. The New York Times, a frequent showpiece example of the power of paywalls, is constantly reporting record-busting subscription numbers, with 7.6 million digital subscriptions in 2021.

At RebelMouse, we pour our souls into making sure that our platform is always the most modern, high-performance CMS on the market. In fact, we invested over $100,000 worth of hours into our platform in Q1 2021 alone. This has resulted in updates and performance enhancements that publishers would have to pay for on their own to make happen on any other platform, such as WordPress. We're proud to be at a level of scale where we can invest this way into our platform, and we will continue to invest at this rate every quarter moving forward just as we have in the past.

Here are the major updates that we've added to the platform in Q1.

The post-pandemic user landscape is still ripe for subscription revenue

You can get a subscription for everything these days. Whether it’s a cheese-of-the-month club or annual access to read your favorite content, the subscription-based model has continued to gain steam in recent years. In fact, the market for digital subscriptions is valued at $650 billion according to a new report from Lineup, a subscription management solution.

The power of the subscription model has been growing since even before the COVID-19 crisis began, and isn’t showing any signs of slowing as we enter a post-pandemic landscape. According to What’s New in Publishing, Gannett reported a 46% year-over-year increase in digital subscriptions in November 2021, putting them at 1.5M total subscribers. Hearst grew its digital subscriptions by 50% in 2021.

But subscriptions aren’t just for big name publishers. Users in 2022 are ready to pay up for legacy names and new media companies alike, as long as it’s for an experience that’s beneficial to them, reliable, and free of the clutter that can come from third-party platforms. Speaking of platforms, even TikTok and Instagram have started to gauge their audiences’ temperature on subscription experiences. So, the competition has never been steeper for publishers looking to build a subscriber base. Unfortunately, launching a simple paywall may not be enough.

Engagement on the Rise: Why It’s Your Ticket to Loyalty

Getting users to your site is only half the battle. For publishers, it’s now become more critical to focus on how long those users stay on your site — and if they ever come back. Q1 2022 data analyzed by Chartbeat found that engagement is on the rise, even though metrics like pageviews and mobile traffic experienced a decline.