Cleaning up After Cambridge Analytica

More than halfway into 2018, the dust has only begun to settle following the Cambridge Analytica scandal that rattled Facebook and its legions of users. The massive data breach didn't just impact the platform — the repercussions also leaked into every corner of the digital ecosystem, affecting everyone. The scandal put a spotlight on the need for the platform giants to take more responsibility as powerful distributors of information, particularly in the realm of news. Now, as Facebook makes constant changes to protect their users' data and prevent the spread of more fake news, its co-chair in the duopoly, Google, has made moves to step up its own game.

In March 2018, the search engine first announced the Google News Initiative, a $300 million investment over the next three years to stop the spread of false news stories. In July 2018, Google announced that it would devote $25 million of the investment specifically to YouTube. Google will provide grants to credible news sources to help them create a sustainable video operation, and to expand their own team of experts to help news partners on the platform — among other YouTube-specific initiatives. 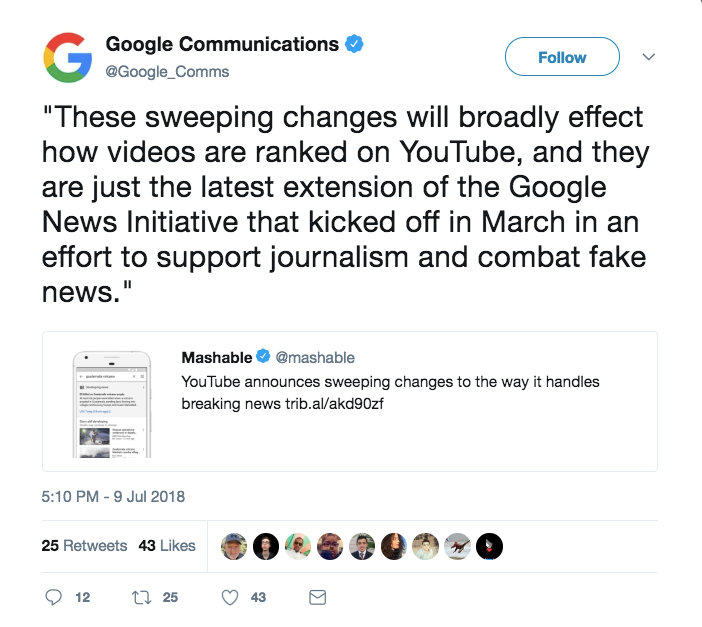 Throughout the spring, Google announced several updates to the Google News app that leverages artificial intelligence to fight fake news and create a more personalized experience for readers. Here's a look at what was rolled out.

For You curates five of the most relevant headlines based on a user's interests, which is usually a mix of breaking, local, and topic-specific stories. User controls help the app learn more about each reader's interests, so the algorithm delivers more relevant results over time.

The "For You" feature on Google News. Image from Google.

Full Coverage allows users to explore a topic through multiple outlets, including other news sites, opinion pieces, and social commentary.

The Newsstand helps users explore every publisher available on Google News. And by using the Google Subscribe feature, readers can also subscribe to news publisher with one click when they discover them.

The Future of News Distribution

The changes Google made to its news offerings this year comes at a turbulent time for the platforms. With a spotlight on transparent and responsible journalism, Google News needs to appease two parties: Publishers need to be won over with a successful distribution strategy, and readers need to be assured that they're using a platform that's a safe place for the latest headlines.

The newest numbers from Pew Research Center show that 93% of Americans get at least some of their news online. This includes both legacy news outlets such as The Washington Post, and new media political sources such as Axios. It's a competitive market not just for the outlets themselves, but also for the audiences they're trying to capture. It's why some publishers feel unnerved to turn over their content to third-party applications like Google News.

Regardless, the ongoing shift to digital doesn't mean news outlets — legacy or otherwise — can't have a reputable news business on the platforms and still generate revenue. What the rise of digital does mean is that the focus has shifted to the reader. With endless opportunities for content, the reader now plays a key role in not only what they consume, but how they choose to consume it.

Richard Gringras, Vice President of Google's News Division, cites this shift as what some have called "the democratization of news." The term refers to "a shifting philosophy in how a news organization engages with the community we once thought of only as 'the audience.'" 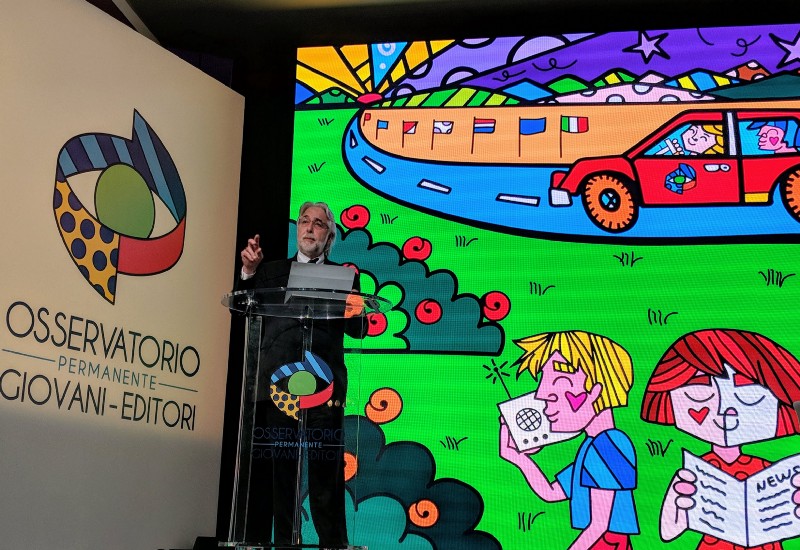 Richard Gringras talks about the future of journalism in Italy.

This is why it's important for publishers to make good use of every outlet available for distribution, including Google News. Whether it's in a publisher's strategy to pursue a subscription-based, donation-based, or purely ad revenue-based model, the content still needs to be freely accessible via the way their audience prefers to find it. Otherwise, it's likely to get lost in the oversaturated market.

Google's changes this year show a renewed priority toward user experience, a key component in building loyalty. Even if Google News isn't right for your particular strategy, it's a good reminder that platforms are making meaningful changes to help publishers and the communities they hope to reach.

At RebelMouse, we can help your content travel across platforms like Google News, even if you aren't using our CMS. We're a team of traffic junkies who help make sure your distribution strategy caters to your content so you can reach your maximum audience with every publish.

Request a proposal today and let's start working together.

What Is RebelMouse?
Request a Proposal
Featured

Meet the RebelMouse Platform: The Highest Performing CMS on the Web