The battle of the platforms has brought us to an even playing field.

There's something called the Reddit Bureau of Investigation. It's a subreddit where curious users leverage crowdsourcing to comb through digital clues to solve crimes. In 2013, it was these redditors who tried to find the Boston Marathon bombing suspects. In 2016, it was also rigorous Reddit investigators who tried to find out if Making a Murderer's Steven Avery was in fact guilty.

These Reddit detectives are just your so-called average joes sitting behind computer screens. And while they may have plenty of awful fails in their investigations, they still make national headlines.

Reddit's go-to internet detectives are an illustration of why digital publishing, particularly distributed content across platforms, has given us all an even playing field. It's also why big media companies should be worried.

The Reddit Bureau of Investigation is a social platform that puts users at the forefront.

When digital publishing first became a real thing — as in when we collectively began to agree that it would take over print — legacy publishers had the upper hand thanks to resources that allowed them to make sexy websites and figure things out on their own time. Then newer big media companies, like The Huffington Post, were able to use innovation to set the bar of what publishing would look like in the digital age.

Soon after that, publishers started to lose their content to the platforms. News began to break on Twitter, viral moments would spread through Facebook, and celebrities shared their changing relationship statuses on Instagram. Oh, and people attempted to solve cold cases on Reddit.

This is when true control was taken away from legacy publishers, along with the big media companies who saw themselves as digital revolutionaries — the social experience removed all the old obstacles to getting published. It's why big media companies so vigorously fight so-called content-hostage-perpetrating platforms like Facebook. And it's why they should be trembling in their boots.

Going Viral on a Passion

There's a quadrant of virality we believe in, made of love, hate, belief, and disbelief. It's what makes content shareable. One of those emotions is always tapped when a moment goes viral. Whether it's disbelief in the color of a dress, sadness at the death of a gorilla, or the outrage needed to join together a resistance movement, emotion steers what makes something worth sharing.

Social platforms remove all boundaries from passionate people connecting with their like-minded audiences. Just as Twitter removed the agents and PR reps that once filtered what celebrities and politicians said, the same has happened for the masses. The best part is these passionate people are the new creators and brand innovators.

At RebelMouse, we've helped plenty of these innovators reach viral heights. We helped harness one woman's love of animals to create the now iconic community The Dodo. Our latest property, Axios, is making waves in political circles. Axios was an instant viral hit because it resonates with the passionate disbelief many feel in our current political climate and the chaos surrounding credible news.

We've also launched new media properties like EcoWatch, LoveMeow, and Higher Perspective, which serve the love of environment, felines, and positive thinking, respectively. That passion is met with engagement in the feeds.

Not only are the obstacles that once hindered these brand innovators gone thanks to the ease of social, they now have another tool at their fingertips their legacy and media counterparts should find scary: lean tech.

A Higher Reach with No Hassle

The new era of passionate content creators already knows how to deliver their brand in a message that speaks to their audience on social.

Think of what Airbnb did to Craigslist. They took content that was resonating on a bad interface and made it a beautiful experience. That's what this batch of creative founders are doing with their new media companies — using savvy, lean tech that ditches heavy design for fast + simple delivery.

Bidding adieu to expensive dev teams, designers, and UX teams breaks down even more walls between content and growth. Breaking through these barriers helps grassroots media companies flourish quickly, with little-to-no launch time and often with an instant, huge reach on social feeds. 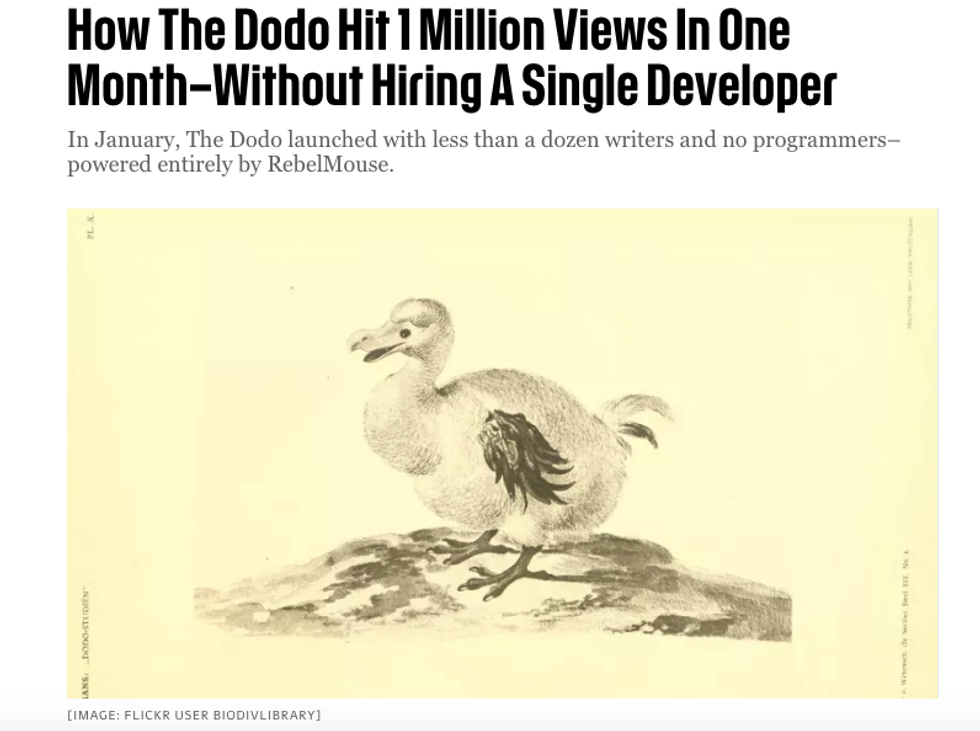 Screenshot from Fast Company after The Dodo's launch.

Predictive social analytics company NewsWhip found that Facebook Pages with relatable or niche focuses drove higher than average engagements. In February 2017, the top 10 Facebook feeds with the highest engagement overall consisted entirely of new media companies, many of which were born on the feeds. Their websites were a lean afterthought. 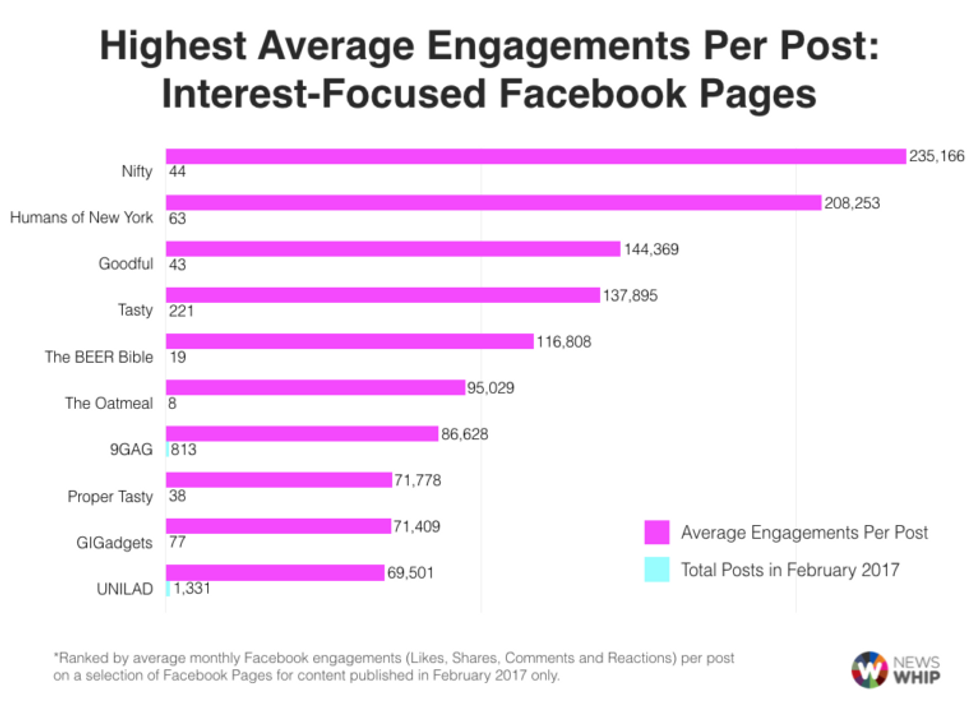 The Pages in the graphic above had much higher engagement than mainstream publishers, despite posting far less content. Many of them posted less than 100 pieces of content the entire month.

There's nobody at Pages like The BEER Bible or UNILAD that serves as the star or founder — it's just people using their resources at hand to create something viral and awesome. They could be the same people behind the Reddit Bureau of Investigation for all we know.

It's this potential for explosive reach at any time that legacy and big media companies should take more stock in, and adjust their strategies accordingly. In order to compete, it's crucial to cut expensive dev teams and focus on content creation and distribution.

We recently took this one step further at RebelMouse with our Social UX for Media. We're rethinking the role websites play in the dynamic, inherently social infoscape. We're catching up websites to the feeds. With features like infinite scroll and before-you-know-it's-an-ad unobtrusive sponsored content integration, your site becomes the feed.

Because everyone deserves to go viral on a passion. It's now on publishers to brace for impact.