RebelMouse is the best CMS for social growth, with a platform built for content creators to thrive in the age of social. See how we got here + how you can join us and start growing within days!

Chances are that the CMS you work in every day was built before social — before the idea of distributed content was even coined. Even though publishing has changed dramatically, a lot of that heavy and outdated tech still exists today.

For example, WordPress has more than 87 million sites, but each platform update still has to be pushed out individually to each and every one of those customers. By contrast, RebelMouse is a centralized CMS, meaning our updates are pushed out to all of our sites at once (and sometimes even multiple times a day). We are always updating and integrating which is why we are quickly becoming the most sought-after alternative to WordPress VIP, with a platform that features content creation tools integrated directly into social APIs.

Websites became a part of our lives long before the revelation that fans are born in the feeds. The opportunity to reach huge social audiences is now, but that doesn't mean the website is dead. Publishing has just evolved.

In 2004, the world was introduced to the digital diary, aka blogging. Blogger.com launched and fueled this movement, gaining incredible traction in the marketing community. "Blog" was even declared word of the year.

When Google acquired Blogger, the importance of blogging and its position in mainstream media was solidified. It became a new outlet used to reach audiences in the ever-changing world of digital, and, soon after, a base for keywords and search engine ranking tactics.

In 2005, HuffPost launched, redefining the nature of online commentary as we knew it. Backed by some big names, HuffPost quickly began changing the way we publish and consume content online. RebelMouse CEO and founder Paul Berry was CTO of HuffPost when it launched, greatly impacting the new media world we currently live in today.

2008 was about the time when WordPress began to gain massive scale. Page views and global unique visitors grew like crazy, and millions of new blogs were being created each year. The company continued their quest for dominance with plans to continue releasing new, user-friendly updates.

During this period, 90% of traffic to websites still came from Google.

2009 proved to be the year that social media went mainstream — the year everyone in the family jumped on board, and not just to post a status update about what they ate. Twitter + Facebook now featured breaking news and political events ... all in real time.

Businesses started to embrace the social platforms as a way to communicate directly with customers. And while new users spiked for a slew of new platforms during this time (Twitter, Reddit, YouTube), Facebook was quietly staking its claim as the dominate figure.

Facebook grew by over 200 million users in 2009. With various updates that focused on content creation, a real-time feed, and the Open Stream API, Facebook saw astronomical growth.

2011 — the year web traffic began to shy away from Google and cling to Facebook instead. The social giant gradually won referral traffic market share thanks to a lack of analytics from Google, and Facebook's own ambitious effort to get content on its site. 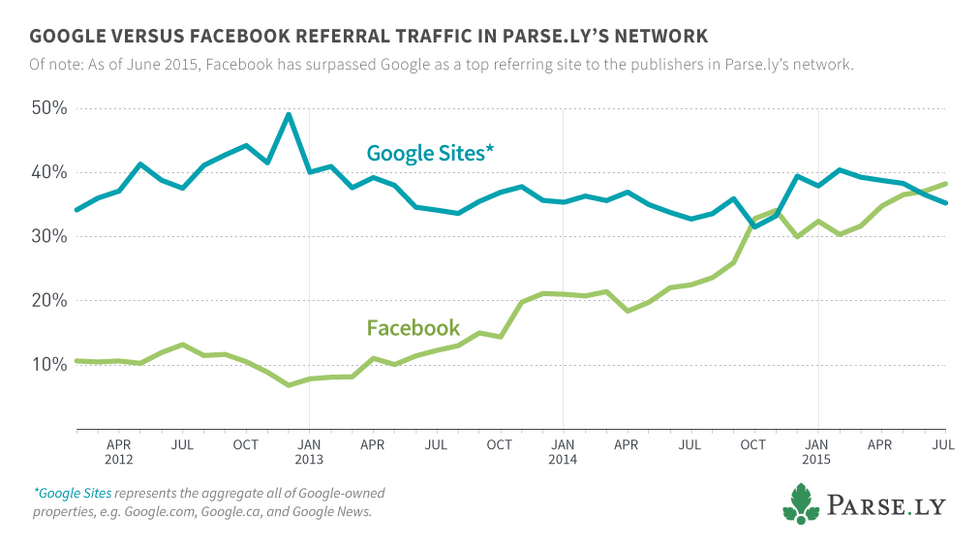 If you didn't start rethinking your content strategy to center it around social by this time, you were already behind. This is where WordPress got it wrong, taking advantage of the social movement instead of adapting with it.

That same year The Dodo launched on RebelMouse, receiving one million views within its first month.

This, coupled with direct video upload shares surpassing YouTube, all but proved that if you're not working with Facebook, then you're on your own. The big video push proved to do wonders for engagement, so publishers adapted quickly.

That same year, The Dodo was acquired at the best valuation of the year.

After launching with RebelMouse at the beginning of 2017, Axios has yet to slow down. Axios delivers news in snackable microposts that are "driven by a style of reaching the modern (business)man in a hurry." Essentially, it mimics the social feeds with record-breaking page views and a bounce rate under 15% thanks to RebelMouse's Social UX design.

This is where we start to see the power of RebelMouse — a centralized, social platform at scale poised to be the dominant social solution by 2020.

RebelMouse was born in 2012 as a social aggregator. Back then, our founder knew platforms would soon reign over the digital kingdom. Now, in 2017, we've evolved and created the best CMS wired for social growth. It is our mission to build a platform for content creators to build thriving businesses in the age of social. We publish to the speed of the social giants with everything under one roof:

We've made social a priority before and during publish, blurring the lines between content and social once and for all. Thinking of social and content as two different entities that have to be separately controlled and managed is not what new media means in 2017.

The features woven into our social CRM are built for audience growth, including:

We believe that subscribing to the mindset of "organic social is dead" is a cop-out, because quality content optimized for social growth will succeed organically. Our community platform is built for deep engagement with content that is optimized for mobile viewing and social feeds by default — not as an afterthought.

Our tech is built for repeatable success on social. At RebelMouse, we're obsessed with contagious media and repeat viral reach. One-off viral moments happen every day, but we power repeat viral events that are backed by data.

We're perfecting the next-generation audience data layer on every platform. It's a strategy so sticky that you'll see your content not only live on every platform, but also travel across platforms seamlessly.

Our proprietary technology lets writers search for Facebook Pages that align with the content they are creating. With those search results, you are then able to engage with likeminded pages through a variety of social signals right from the platform. And we give you the data on who is sharing your content while keeping a detailed timeline of every share. It's your target audience delivered right to the palm of your hand.

We offer the same game-changing search API for Twitter that we do for Facebook. Writers can also deconstruct articles into microposts right from our platform. You can build a listicle and tweet each item right from the RebelMouse Entry Editor in no time flat.

The paradigm has changed, and quickly. The opportunity window to reach huge social audiences is now. Failure to move fast is causing the decline and collapse of companies.

Join RebelMouse and start growing on social — and everywhere else — within days, not months. Feel what it's like to publish new media on the best CMS in 2017.